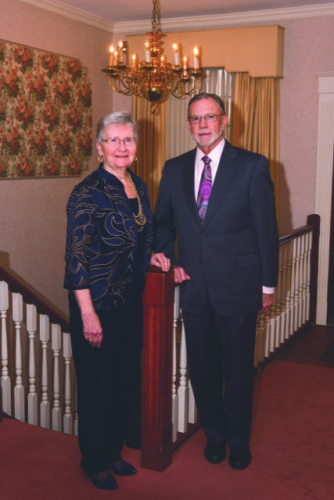 “We are very proud of our culture of caring and innovation. We have these wonderful people and they will do everything they can for families. Our professional staff is very dedicated to their craft; they go out of their way to serve the families, to tend to them, and have the ability to adapt to families wants and needs to produce a service that is meaningful to them.”

Bill Hathaway grew up as a third-generation funeral director, living above his family’s funeral home in Fall River. Bill met his wife, Ruth, when they were teenagers in their local church Baptist Youth Fellowship. They were married in 1964, and have two children, BT and Lynn, who are also licensed funeral directors working within Hathaway Family Funeral Homes. Bill and Ruth are very actively involved in the community. They are members of the First Baptist Church in Fall River, where Ruth served over 20 years as the minister of music. Ruth had also previously served as a chair of the Fall River Chamber of Commerce, and Fall River Celebrates America.

She is also a past president of the Fellowship of American Baptist Musicians. Bill has served as a board member and secretary-treasurer of the National Selected Morticians, now called Selected Independent Funeral Homes. The Hathaway Family Association, a genealogical organization in which Bill serves as president and Ruth serves as treasurer, will be having its 105th annual meeting this year.

Bill and Ruth were skiing enthusiasts, and in the summer months, they enjoy cruising up and down the east coast in their boat. They also love spending time with their families, both children, and grandchildren.

“I think there is much to be grateful for that I am a fourth generation of a family business that is able to put people before dollars. That approach is a big part of why we are still here - putting people first.“

Although BT officially came to work for Hathaway Family Funeral Homes Fall River location in 1990, he quite literally grew up around the business. As a teenager, he helped his grandfather by pulling weeds, mowing the lawn, and providing a telephone answering service, before answering machines were commonplace. Today, he acts as a funeral director and funeral home manager, serving families in the area.

William ”BT“ Hathaway, III BT was raised in Somerset. He has received a music degree from Samford University in Alabama before returning to Massachusetts to study as a funeral director at Mount Ida College. He served as the President of the Massachusetts Funeral Directors Association in 2003 - 2004.

Currently, BT resides in Fairhaven and enjoys spending time with his 3 adult children. He has a passion for writing and has even had some of his poetry published more recently. He is also serving as the President of the Greater Fall River Symphony Orchestra.

“For those that look to Hathaway to help with their funeral planning needs, my goal is to make them feel comfortable asking any and all questions. We provide the answers and guidance to every client to best meet the needs of their family’s situation.”

Lynn grew up as the fourth generation in a family of funeral home directors. For nearly twenty years, she had been working in the family business in an administrative role. More recently, Lynn made the transition to a managing director role and is now the pre-need manager at all Hathaway Family Funeral Home locations. Lynn is known for her ability to listen to families and understand their wants and needs in planning a service for a loved one.

Lynn received her education from Bryant College where she studied business. In 2016, she graduated as the valedictorian in her graduating class from FINE Mortuary College in Norwood, MA.  She became a licensed Funeral Director in 2017. Lynn served her internship under Jay Moran at the Crapo-Hathaway location in Taunton, where she continues to serve families today.

Lynn has a passion for animals and previously volunteered as Secretary for her local Animal Rescue League. When her children, Krista and Nicholas, were of school age, Lynn was very actively involved in supporting their school band and music curriculum at the Somerset Berkley Regional High School. Krista is now a graduate of Butler University in Indianapolis, IN and Nicholas is serving in the U.S. Air Force.

“The Hathaway family and staff have a commitment like no other in funeral service to providing a meaningful and affordable celebration of a loved one’s life. We live here. We work here. We understand - plain and simple.”

Mike has worked with Hathaway Family Funeral Homes for 17 years. Every day he looks forward to coming to work, assisting the staff, families, and the community. Born and raised in Fall River, Mike cares deeply about providing compassion for local community members. He is a member of the Lodge of Elks #118 in Fall River.

Mike is married to his wife, Andrea, and has a son, Timothy. He is an avid fitness enthusiast and enjoys attending New England sporting events.

“At Crapo-Hathaway, we understand putting the needs of families first. We are here to serve the community, because it is our community. I am honored to be a part of such a longstanding history of putting people first.”

For nearly 30 years, Jay Moran has shown his commitment to his local community, serving families at the Crapo-Hathaway Funeral Home located in Taunton. Jay has deep roots in the community as he was born and raised in Taunton, and still resides there today. Additionally, Jay is an active member of St. Andrew’s Church and serves as the Vice Chair of the Cemetery Commission in Taunton.

Jay graduated from Coyle High School in 1962 and went on to receive his funeral service education from New England Institute, graduating in 1963. He served in the Army during the Vietnam War and completed his apprenticeship at a local firm upon his return.

He became a licensed funeral director in 1970 and began working at Crapo Funeral Home. He was honored to stay on as the manager of that location when it was acquired by Hathaway Family Funeral Homes in 1989 and continues today as a valued member of the Hathaway team.

Jay has two children, Catherine who lives in New Hampshire, and Jay Jr. residing in East Providence. When he is not serving families, he enjoys spending time with his two granddaughters.

“The most rewarding part of my job is being able to help people who are going through a time of loss, making their time with our funeral home as helpful and pleasant as possible.”

Since April of 1999, Larry has been a part of Hathaway Family Funeral Homes. He enjoys working with a very compassionate and caring group of individuals and takes pride in being a part of a family owned company with over 100 years of history. He believes families appreciate the experience of working with familiar faces at Hathaway locations.

When he is not working, Larry enjoys spending time with his family, watching his children play sports and dance. When he has free time, he likes to go fishing and play golf.

“My ultimate goal is to put families at ease during the process of arranging a funeral. To see the switch flip during our conversation and to know that the “full plate" feeling and pressure of uncertainty has subsided from their minds because they know and understand that we will handle every detail of the service with the utmost dignity and respect is everything for me. On top of it all, knowing I have fantastic team of staff backing me up brings it all together.”
Alex joined Hathaway Family Funeral Homes in 2016. He had grown up in northern New Jersey, but made the decision to move to Somerset, Massachusetts in 2008, bringing him closer to his family's roots in Bristol, RI. Alex is a member of the National Funeral Directors Association, the Massachusetts Funeral Directors Association, and is a volunteer for the Taunton Emergency Management Agency.
Alex graduated in 2005 from West Morris Mendham High School in Mendham, NJ. He went on to receive his Mortuary Science degree from Lincoln College of New England (formerly Briarwood College in Southington, CT) in 2008. He is a licensed funeral director in both Massachusetts and Rhode Island.
When Alex is not working, he enjoys watching movies or hiking with his wife, Amanda. He is also a skeet and sport shooting enthusiast.

On behalf of the DiRubio and Murray families I would like to thank Alex Gross and his team for their kind, calming and thoughtful guidance given to us as we prepared for the wake of our beloved mother, Sharon DiRubio. A special word of appreciation to Jay Moran who took care of us personally 15 years ago when our dad died and once again was present for us with his smile and inspiring presence as we struggled with the death of our iconic mother who he knew personally. Each of you (and those who were with us the day of the wake) made a difficult experience bearable.
And a big THANK YOU for the way you put together the video. It could not have been more perfect!!!
Warmest Regards,
Shelley DiRubio Murray
December 3, 2021 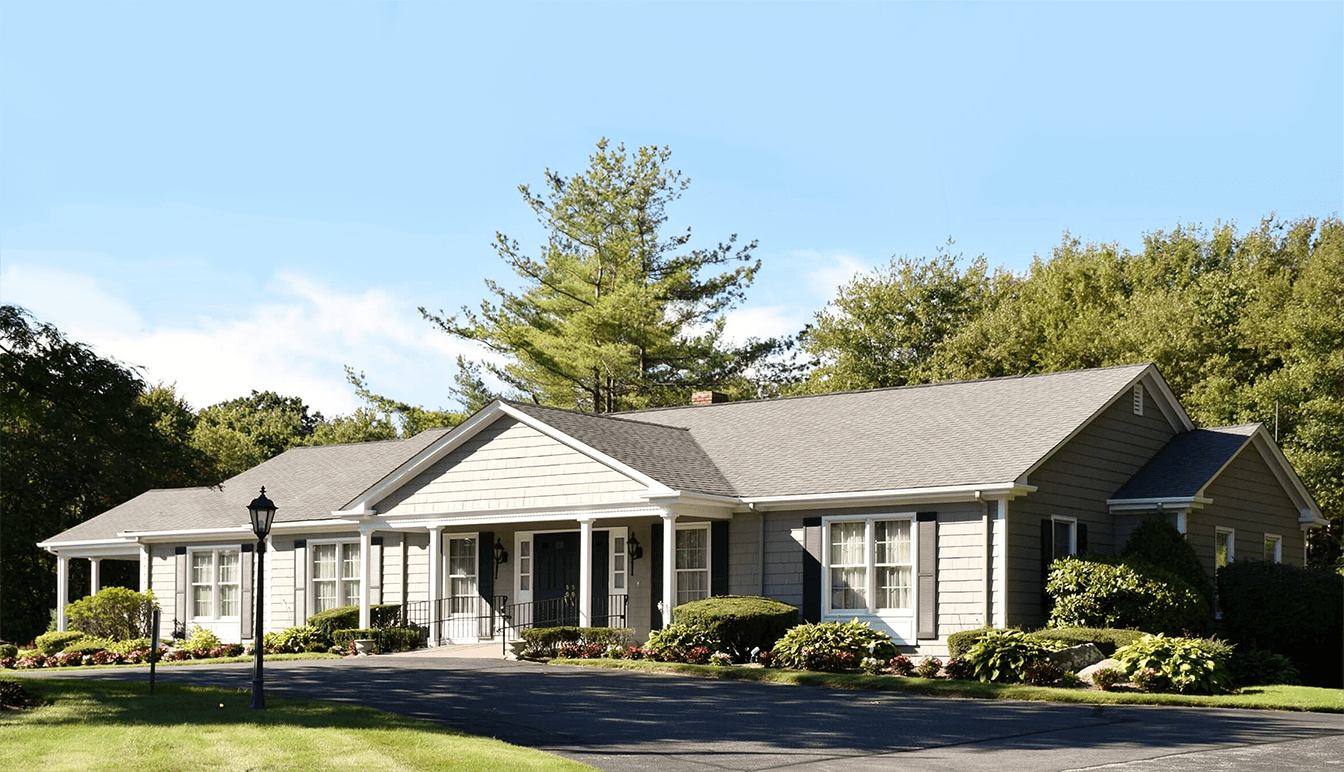